“I always think that keeping your chin up isn’t that hard. You just need to lift your face. It’s your heart that takes the effort. When it falls over it can be so stubborn about getting back up.”

London, November 1941. Following the departure of the formidable Henrietta Bird from Woman’s Friend magazine, things are looking up for Emmeline Lake as she takes on the challenge of becoming a young wartime advice columnist. Her relationship with boyfriend Charles (now stationed back in the UK) is blossoming, while Emmy’s best friend Bunty, still reeling from the very worst of the Blitz, is bravely looking to the future. Together, the friends are determined to make a go of it.

When the Ministry of Information calls on Britain’s women’s magazines to help recruit desperately needed female workers to the war effort, Emmy is thrilled to be asked to step up and help. But when she and Bunty meet a young woman who shows them the very real challenges that women war workers face, Emmy must tackle a life-changing dilemma between doing her duty and standing by her friends. 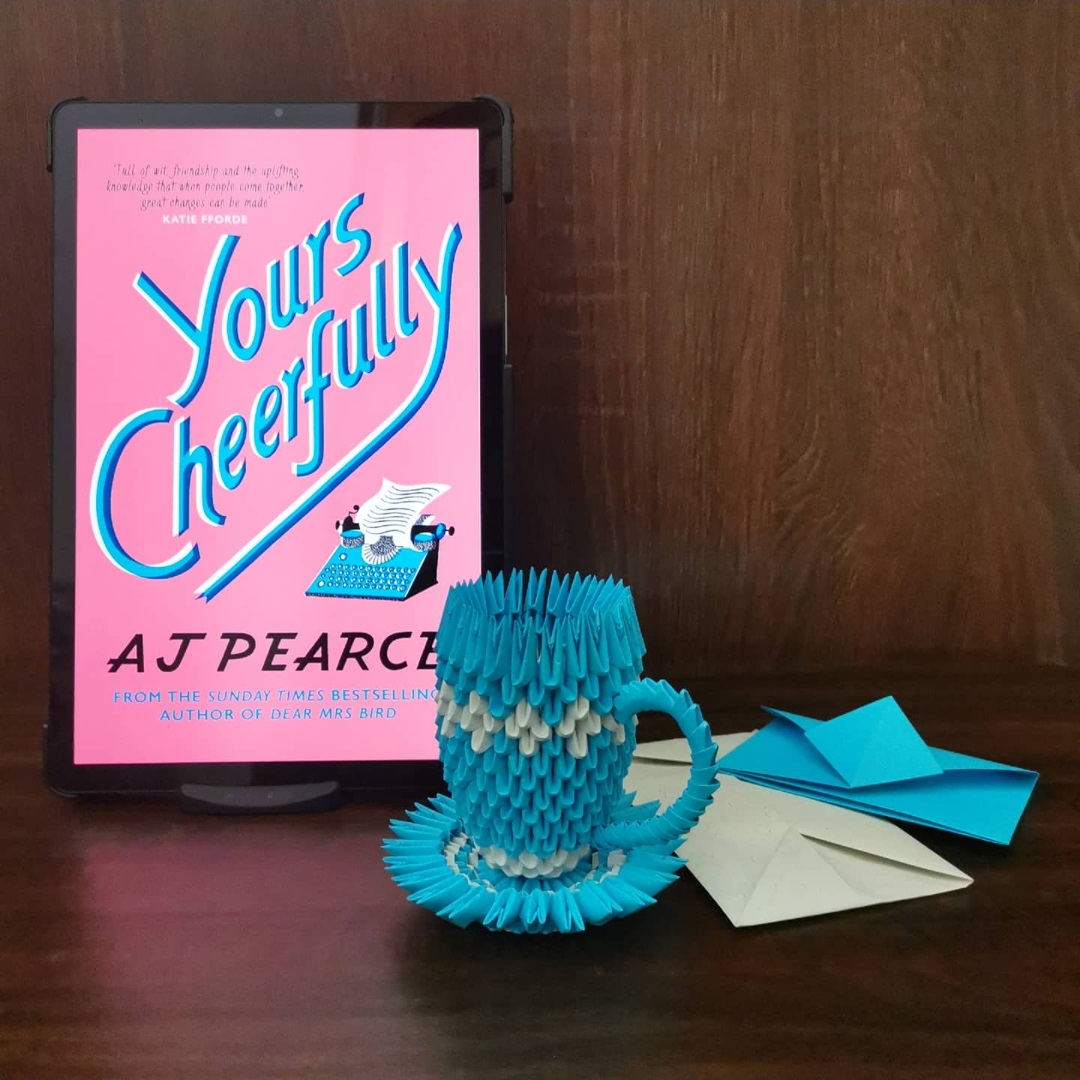 Dear Mrs. Bird is one of my favourite books set during WWII – one I recommend often to friends and readers. I am thrilled the author wrote this sequel which revisits the much-loved characters. This time they have a new challenge to tackle in their endeavour to help women.

Henrietta Helps, the women’s advice column in Women’s Friend magazine, is getting a makeover and Emmy, despite bungling it up the first time, can hopefully redeem herself. After she accompanies Mr. Collins to the Ministry of Information for the big meeting, Emmy realises there is so much more women want to do during the war, if only they are given the opportunity.

Meeting with Anne Oliver on a train gives Emmy the chance to see how women are finding work to keep themselves engaged and gainfully employed. Everyone has a reason to work, be it survival, experience, or independence. With help from Anne, Emmy decides to write a feature on women working in factories. It is during her interviews with staff and management that she discovers the plight of women on the ground. They don’t have access to basic amenities, no support system and no assistance in resolving their issues This is not the picture the ministry is promoting when calling women to join the war effort.

Yours Cheerfully recognises the efforts of women which are critical to any economy. It addresses the real world problems women face as bread earners, as parents and care givers, and most importantly, as employees. Pearce does a brilliant job of focusing on these issues with taut wisdom and a calm, gentle sense of humour.

Her characters find joy in the simplicity of life the war has forced on them. They make wedding planning sound exciting even if the dress is made out of damaged parachute fabric, decorations from newspaper chains, and the large, decorative two-tier wedding cake has only one edible tier.

Emmy is cognisant that her dilemma in being true to her journalistic responsibility must not interfere with her friends’ employment status. This brings her to find creative ways to highlight the issues while keeping within the ministry’s agenda. Her colleagues at Women’s Friend understand and support her.

“Think about the women. They’re the ones keeping everything going while the boys are away . . . Our job is still to help them, just as much as we help the war effort.”

It is Emmy’s grit which makes her such a spirited character, one you easily come to adore. Her mistakes are human and her determination inspiring which makes her the perfect protagonist for this series. (Psst! A J Pearce, I hope you will write more books to continue her story.)

I must mention, Guy Collins, the magazine editor, was one of my favourite characters and to have him return in the sequel is simply delightful. Sharp, witty and often mysterious, he knows it is women who rule the world and he steps aside and watches them do just that.

A poignant and endearing story of women supporting women amidst the hardships of war, this celebrates female friendships and their power to bring change. If you’ve read Dear Mrs. Bird, you know you’ll love this.

Yours Cheerfully (The Emmy Lake Chronicles #2) by A J Pearce. Published in June 2021 by Picador, an imprint of Pan Macmillan. This ARC courtesy of NetGalley and Pan Macmillan.

About Photo: Every day, the team at Women’s Friend gather around with cups of tea and go over their plans. Emmy is tasked with reading correspondence coming in, asking for advice. I imagine this is what her desk would look like.
The tea cup and saucer are made with 3D chinese origami. The envelopes are folded in regular origami. 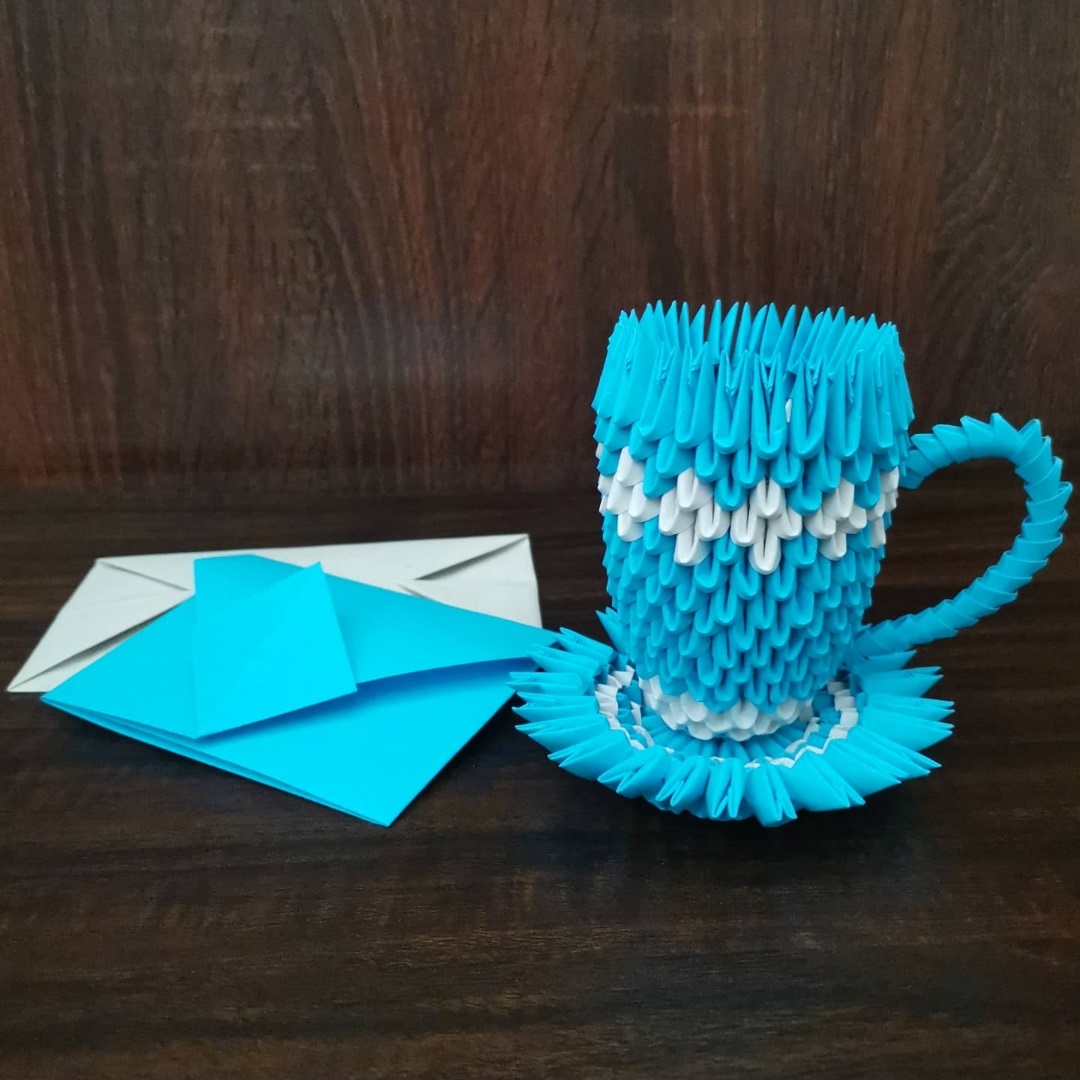 About the Author: AJ Pearce grew up in Hampshire, England. Her debut novel, Dear Mrs. Bird, was a Sunday Times and international bestseller and was shortlisted for the British Book Awards Debut of the Year and the Historical Writers’ Association Debut Crown for best historical debut. Yours Cheerfully is the second novel in The Emmy Lake Chronicles.
Connect with her on Twitter, Instagram and Facebook.