How many times in a week do we crave for five magical minutes of peace amidst a particularly rough day at work? Just so we can take a step back, breathe, and jump back into action, reinvigorated.

Imagine the aching desire for those same moments of peace when you are in a nation torn apart by war. A war which brings your entire world crashing down around you. A war that consumes all that is material, all that is human, and destroys every little emotion inside of you, and reduces it to the devastating remains of blood and tears. Imagine how precious those rare moments of peace would be, if at all, and how hard would you be willing to fight to keep them close.

Caught in the cross hairs of a raging civil war in Syria, is Ameenah. Displaced unexpectedly as a child bride, she navigates out of the heart of Dimashq (Damascus), and plunges into the ancient city of Haleb (Alleppo). Her voyage of self discovery is a heady mix of the personal and the political, and the maddening noise of conflict weaves a fabric that entangles her with the lives of many around her. As missile after missile brings the city down into a hapless pile of rubble, Ameenah builds it back up with her simple act of resistance: doodling.

In The Doodler of Dimashq, Kirthi Jayakumar brings a heart wrenching tale of hope that rises from Syria’s rubble like a phoenix. 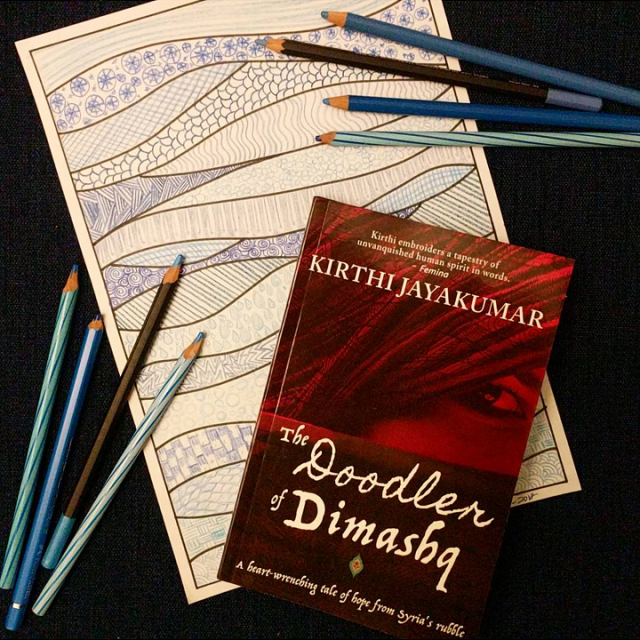 There is a moment towards the end of the book, when Ameenah recalls a conversation with her husband. He tells her he doesn’t like the word homesick’ because it’s like saying you are sick of home. He offers an alternate instead from the Welsh language – Hiraeth – which means the bond you share with your home. It has everything, he says, nostalgia, memories, dreams, sights, smells, sounds. Everything that made home what it was for you.

Ameenah’s story does not choose to take sides between the government or the resistance. Her story is really about home and a sense of belonging. Belonging to a place, to its people. It is about finding a way to survive, to hold on to what little remains when all that is taken away from her.

As Ameenah travels through the cities on her journey, the author describes Syria in all its splendour as it once was. She unearths it from beneath the news stories we see today, to reveal a land of exceptional beauty that few are aware even existed. And then, as the cities fall to the ground brick by brick, she shows how Ameenah fights to share her strength by way of her art.

The author’s words are powerful. She captivates you with the stark contrasts between the good and bad, the past and the present, the happy and the sad, that she draws at every scene. The following lines are a brilliant example:

Each chapter in the book is preceded by a doodle where the author picks up one simple pattern and translates it into a way of life. As Ameenah’s story progresses, the patterns become more complex, the lines taking shapes of petals and swirls, each describing their beauty in a doodle, as well as in life.

As a reader, I often found my heart in the grip of fear, beating wildly at the loneliness of a young girl’s perilious journey. I couldn’t help but shed a tear at her struggles, or refrain from rejoicing in her achievements.

In her Author’s Note, Jayakumar writes: I may not be Syrian; I may not have lived through the war. But I’m human. And I can feel. And so, I leave this peace of my heart at your doorstep and knock thrice, on your doors of empathy.

This achingly beautiful story of Ameenah will break even the strongest of hearts.

I read a quote that without peace, all other dreams vanish and are reduced to ashes. The Doodler of Dimashq may appear to be a quest for peace in a state of war. Yet, Ameenah’s story is so much more. It is an inspiration and carries in it an unbeatable strength. It is a reminder that all we need is a little hope to carry on. That when all is lost, it is hope that will take us closer to our dreams.

About the Author: Kirthi Jayakumar is an activist, artist and writer from Chennai, India. She founded and runs the Red Elephant Foundation, a civilian peacebuilding initiative that works for gender equality through storytelling, advocacy and digital interventions. She is a member of the Youth Working Group for Gender Equality under the UNIANYD. Kirthi is the recipient of the US Presidential Services Medal (2012) for her services as a volunteer to Delta Women NGO and the two-time recipient of the UN Online Volunteer of the Year Award (2012, 2013). “Stories of Hope” is Kirthi’s first solo book, comprising a collection of short stories. She also co-authored a book titled Love Me Mama: The Unfavoured Child, along with Elsie Ijorogu-Reed, the founder of Delta Women NGO. Her second book, The Dove’s Lament, published by Readomania, made it to the final shortlist for the Muse India Young Writers’ Literary Award. In addition, Kirthi has published a series of eBooks centered around Peace and Conflict. Kirthi was recently invited to the United State of Women Summit at the White House in Washington DC, as a nominated change maker. She is also a Zen Doodler and her works have been commissioned by corporate establishments, non-profits and art collectors world over. She runs an Instagram based project called “Femcyclopaedia” where she doodles portraits of inspiring women through the ages and from across the world and curates their stories under these portraits. The story of Femcyclopaedia won a Story Award from World Pulse in February 2017. Kirthi lives in Chennai.
She can be contacted on social media via Facebook and Twitter.

Note – I received this review copy from Readomania in exchange for an honest and unbiased review.