I learnt long ago that we win some, we lose some, yet, life goes on.  Even then, many, like me, who have experienced a great joy or a heartbreaking tragedy will agree it is easier said than done.

It has been a few months since I came out of a nine-year-old relationship and letting go was probably one of the toughest decisions I had to make. There are days when my heart still weeps and I don’t know how to deal with it.

So, here I am, trying to deal with it the only way I can – by writing.

As far as I remember, everything was fine until the first cracks began to appear at the start of the new year. We hadn’t been spending much time together and I assumed that was the reason. I ignored the cracks. Besides, there were other things keeping me busy, leaving me no time to tend to tantrums. That was Mistake No. 1.

When realisation dawned that I was expecting far more than I was investing in the relationship, I decided to rectify my actions. By then, unfortunately, the cracks had deepened.

Despite the glaring signs to which I refused to pay any attention, I convinced myself that it was nothing more than misbelief. That time would heal what was broken. It wasn’t the end yet, it couldn’t be. We had so much more to share. We had to have more time together. That was Mistake No. 2.

When I told my family, some encouraged me to continue, seeing how hung up I was on this relationship. Others tried to convince me it wasn’t worth it. That I should just snap the link once and for all. But I couldn’t muster the courage to take that last step.

So, I decided to seek professional help. Maybe what we really needed was for someone to clinically analyse and gauge if we were worth fixing. When the report came, it broke my heart. The damage was far too extensive. It was then that I finally gave up. If we were so un-mendable, it was best to break all ties. Had it not been for this report, I doubt I would have gone through it .

On June 9th 2017, I finally sold my beloved Honda Civic that had been my partner for all my travels in and around NCR for the last nine years.

In hindsight I think I should have taken this decision much earlier. It would have saved me from so much heartache. But this being my biggest purchase ever, It wasn’t easy at all.

The day the buyer came to collect it, I was trying to think of something to keep with me as a memory. I would have liked to rip a side-view mirror off since we have some special memories together, but those things alone go for a minimum of Rs.5,500. There was no way I could take that.

Eventually, my gaze fell on the pair of cushions emblazoned with the Honda logo which I don’t ever remember using. They sat snug in the boot, wrapped in original packing, since they day I drove the car out of the showroom.

I reminisced about the times, while driving on a long route, when I would think how nice it would be to have a chauffeur while I sit back against the cushions and enjoy the view of the sky, not having to worry about traffic.

So, moments before the buyer arrived to take delivery of my Civic, I sneaked the cushions out of the car and inside my house. 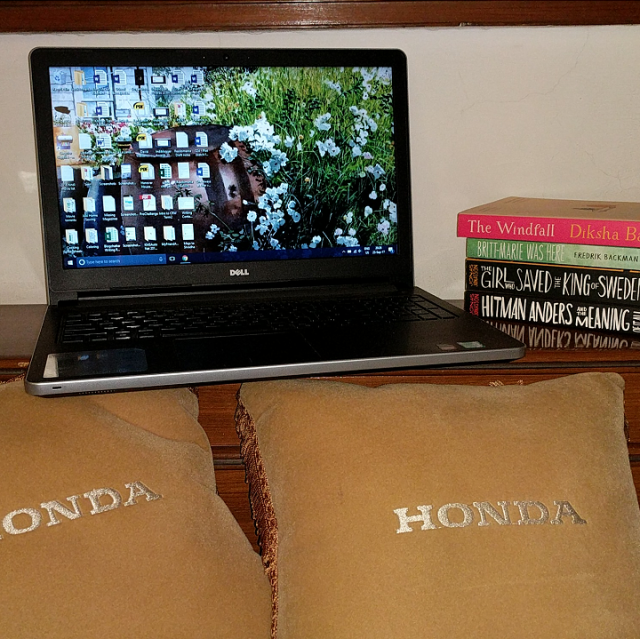 Nearly four months later, my gorgeous misty-violet beauty may be gone, but its memories are alive. And as I sit and write this, my hand running over the velvet face of the cushion, fingers skimming over the logo, I close my eyes and remember all the good times we’ve had.

I do carry the hope that we may meet someday on the streets of Delhi, side by side on a traffic signal, and beam in that joyous moment of seeing each other again.

This post is participating in #MyFriendAlexa because I am taking my Alexa rank to the next level with Blogchatter.